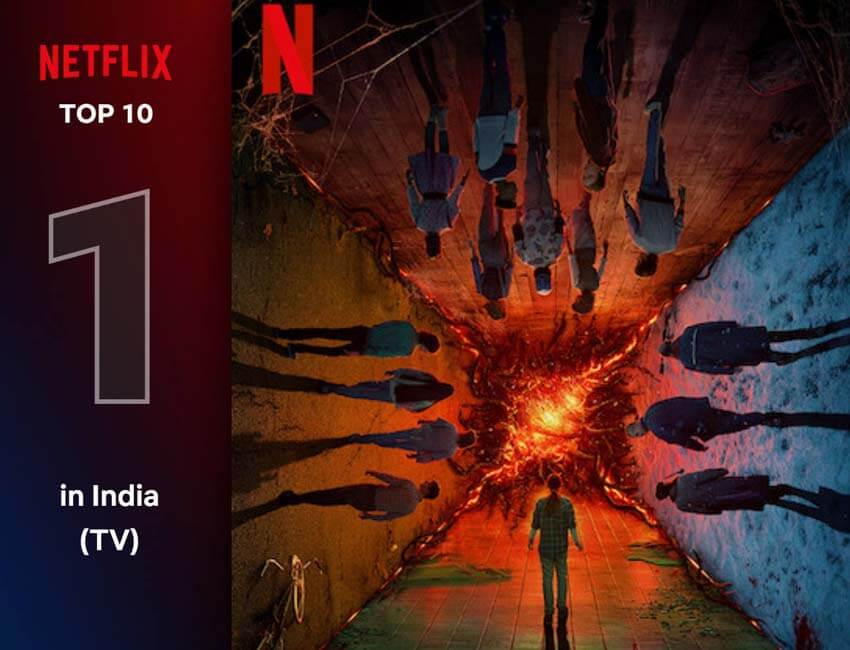 Stranger Things 4 has now become Netflix’s most viewed English-language series globally. Currently, the fan-favorite series is in the Top 10 of 93 countries and the number 1 most-watched TV series across 85 countries on Netflix including India. As per Netflix’s India Top 10, it has become the most-watched English language TV show in India this week Available in languages including English, Hindi, Tamil, and Telugu. Within a week of its global release, the Netflix Original series has received immense love from fans in India. Not just season 4 volume 1, all seasons of this iconic series are currently trending in the Top 10 row of India.

In one of a kind of fan engagement, Netflix celebrated the beloved soundtrack of Stranger Things with a unique Indian twist in a collaboration with legendary music composer, Ilaiyaraaja who created a special rendition of the series’ opening theme. The 2-minute music video showcases elements of the series and also features music maestro Ilaiyaraaja himself, with over 200K+ views. In another collaboration with self-proclaimed Stranger Things fanboy and popular Bollywood star, Varun Dhawan created an engaging video that features a special tour of his house, where things get Stranger! Posted across platforms, the video has over 948K+ views on Instagram and 5M+ views on YouTube. Amongst the many brands celebrating the launch of Stranger Things 4, Netflix partnered with beloved cookie brand, OREO to launch a limited-edition Stranger Things-themed red Oreo for fans to enjoy.

Stranger Things has become a pop culture phenomenon since the first season. With over 23 mn views, Stranger Things Season 4 trailer piqued the curiosity of fans as seen by reactions on social media. Netizens, who binge-watched the series within a day of its release also expressed their excitement on social media. There are many such reaction videos from the Indian audience expressing their love for the series. This demonstrates the immense love for Stranger Things in India as it is widely viewed and celebrated in the country.

Ever since Eleven (Millie Bobby Brown) ripped open a portal between Hawkins and the Upside Down in 1983, many similar rifts have been opening up in unexpected places. In line with this, ahead of the release of Volume 1 of Stranger Things season 4, Netflix turned “the world upside down” with its larger-than-life projections in 14 countries.

Stranger Things 4. Vol. 1 premiered last month with a one-of-a-kind projection mapping of Mumbai’s beloved and iconic tourist monument – The Gateway of India. The heritage landmark was lit up with a larger-than-life display of popular pieces from the series, taking over Mumbai’s night skies. The audience’s awed reaction to the spectacular projection of the ‘rift’ in a genuinely immersive experience was a moment to savor. The Twitter handle of Netflix India as well as the Official page/Fan pages of Stranger Things were flooded with comments and retweets and shared images after the Gateway of India promotion.