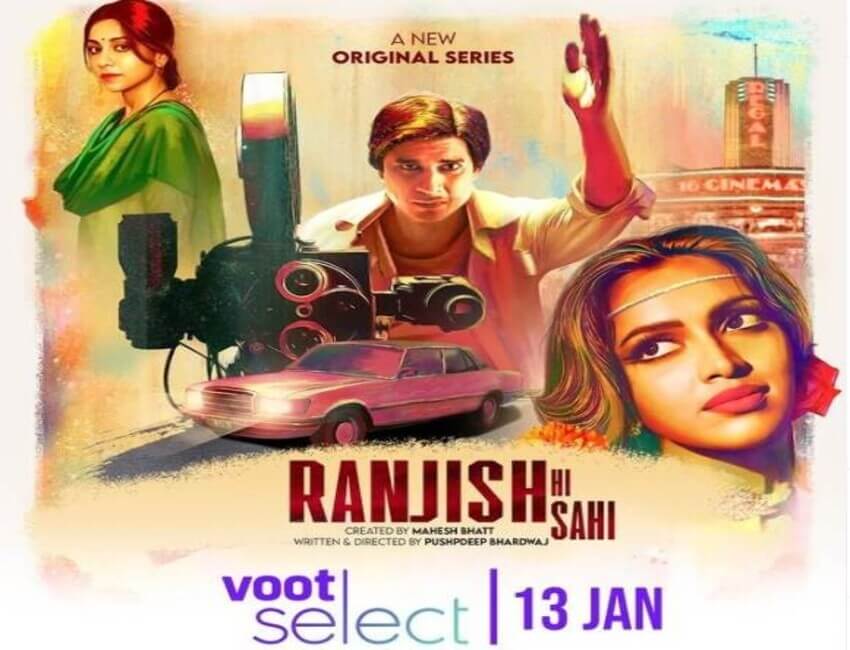 Voot Select has always brought forth out of the box content for its viewers since its inception and widened its original content offering. The platform continues to push the envelope with yet another clutter-breaking show that promises to stand out Ranjish Hi Sahi. Certain years leave a permanent imprint in your memories and Ranjish Hi Sahi a dramatic love story set in the golden era of 70s Bollywood is sure to keep the audience hooked from start to finish. Produced by Mukesh Bhatt and Jio Studios, the web-series features Tahir Raj Bhasin, Amala Paul and Amrita Puri in lead roles.

Created by Mahesh Bhatt, written and directed by Pushpdeep Bhardwaj, a Vishesh Entertainment production – the series revolves around a fledgling maverick film director who gets drawn into an extra-marital affair with an eccentric superstar who changes his life forever; his marriage with his first love spirals as he is torn in between two worlds. Set mainly in 70s Bollywood, the golden era of bellbottoms and some great music. This story revolves around the lives of Shankar, Amna, and Anju. The story explores complicated human relationships between adults and the different shades that love can take. An intense drama, it explores temptation, forbidden love, passion, trust, marriage, loyalty, unconditionally, stability, obsession, and separation in a myriad of emotions.

The show not only promises a nostalgic trip down memory lane by rekindling those golden moments of a glamourous era but also revisiting one of the most creatively rich and audacious period in Bollywood. Further, the series will showcase an exceptional soundtrack – the Bhatts’ style with music by Aabhas and Shreyas and mellifluent tracks sung by Rekha Bharadwaj, Vishal Mishra, Javed Ali and Ash King

Talking about the show, an elated director Pushpdeep Bhardwaj shares, “With so many thrillers and crime shows being made, I was keen on making a dramatic love story with music at its core- something that could stand out. Through a lot of research and a lot more conversations, Ranjish Hi Sahi came into being. An attempt to bring out complex human emotions, based in the Golden Era of the film industry: the glorious 70’s. Recreating this world amidst today’s testing times, was nothing short of miraculous, and this wouldn’t have been possible without the generosity of all those at Jio Studios. Now that the show is finally ready, I am beyond thrilled and can’t wait for the audiences to witness our labour of love!”

Expressing his thoughts on playing such a layered character, Tahir Raj Bhasin, says “When I was narrated the script of this unique love story, I was instantly gripped by how layered, Shankar, the character is. What drew me to the part was the challenge of a romantic drama where the protagonist is torn between the love of the two women in his life. Shankar blurs the lines between a vulnerable romantic and an authoritative rebel. Playing him was a complex emotional roller coaster but most of all it was a whole lot of fun.”

Amala Paul who makers her Bollywood debut with the show shares, “When I received a call from Vishesh Entertainment to play this character, my reaction was, ‘Wow! Do I actually resemble a Bollywood superstar from the 70s?’ I was ecstatic; a feeling I cannot put into words but at the same time there is a huge sense of responsibility. The character of this Bollywood diva had a fierce and unapologetic personality; to translate that kind of energy on-screen was challenging. It was like a game of imagination, but I did a lot of research. It was surely an enriching experience.”

“Anju’s simplicity is her strength. Getting into the skin of her character was a learning experience for me. Her life and the times in which she lived are both so different from mine.  She is extremely resilient and the reason why the family sticks together. I was amazed with her empathetic nature and capacity to forgive. It’s not easy being a homemaker and the emotional backbone of the family. It gave me a new perspective on things.” Amrita Puri concludes.