Flipkart Video and Sikhya Entertainment Return With A New Season Of The Hit Crime Series: Kaun? Who Did It? 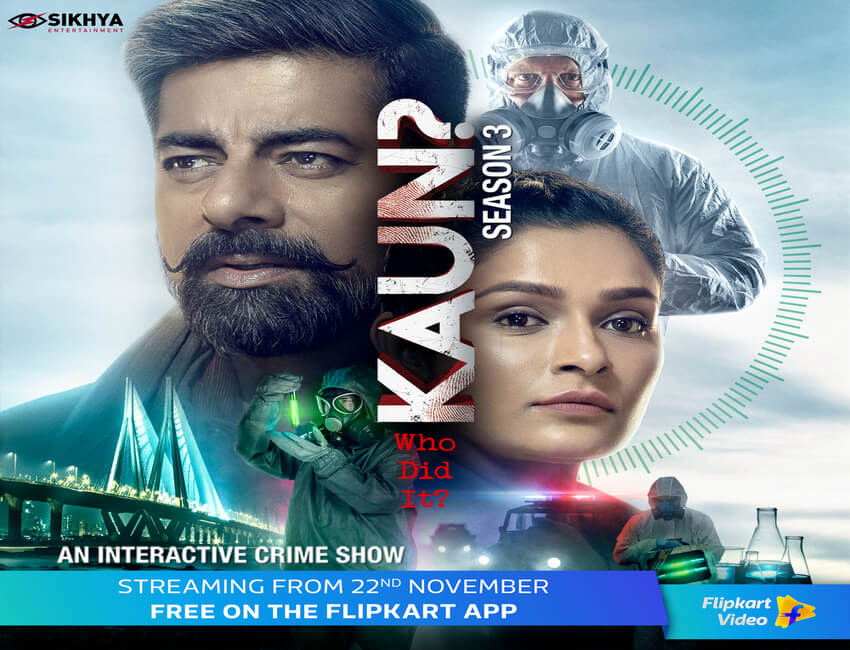 Flipkart Video started the year with a bang by foraying into the interactive crime fiction category with the launch of Kaun? Who Did It? in collaboration with Guneet Monga’s, Sikhya Entertainment. The platform is set to end this year with a dhamakedar new season of Kaun? Who Did It? that combines the thrill of playing detective and the chance to win big, all at the comfort of your phone.

Over the last two seasons, lead characters detective Adi and inspector Malini cemented a strong relationship with the viewers with each hair-raising case. Reprising their roles, popular TV actor Sushant Singh will return as the show lead, Adi Bhagat, and film and theatre actress Samvedna Suwalka as assistant police inspector Malini Bindre. Created by the talented director Umesh Bist, and written by veteran TV writer Sunjoy Shekhar, the new season is packed with gripping episodes that will leave audiences at the edge of their seats.
ALSO READ: Flipkart Video is set to bring out your inner detective with Kaun? Who did it?
The last two seasons gave viewers spine-chilling moments including the finale of season two where Adi battles it out against time to decode the password to a bomb threat as the season culminates into a cliffhanger for audiences. This new season takes a 360-degree turn to focus on Adi’s archnemesis who makes a comeback with an evil motive to destroy the city. In addition, this season will also shed light on Malini’s secretive past and an even uncertain future. With the city under attack, will Adi find victory in his race to defeat his enemy? Audiences have a lot to unravel this season. Commenting on the launch of the new season, actor Sushant Singh said, “I have worked extensively in films all my life across genres but when I signed up for Kaun? Who Did It? For the first season, it was more of a challenge for me to master the interactive content format. Three seasons down the line, it just gets better and better. From my debut on OTT to learning how to engage the audiences as the show goes on, exploring such interesting storylines with each season is a joy. It’s a pleasure to work with Flipkart Video and Sikhya and I cannot wait for the audiences to tune in and get solving these mysteries.”
ALSO SEE: Aarya Web Series -Behind The Scenes
Actor Samvedna Suwalka added, “For me, personally and professionally, it’s been one of the most satisfying journeys to have worked on Kaun? Who Did It? From season 1 until now I have had the opportunity to work with and learn from Sushant sir and Guneet Monga while working on an ever-evolving interactive show format. Malini’s secrets from the past will take centre stage this season and so this season was creatively challenging yet exciting for me and I cannot wait for my fans to experience the new twists and turns.”
Speaking about the return of the interactive crime fiction series with Flipkart Video, Guneet Monga, CEO, Sikhya Entertainment, said, we are excited for the release of Kaun season 3! The way the audience is consuming content these days has opened up many opportunities for creators to be more innovative and offbeat. Kaun? Who Did It? is an interactive crime show, let us be versatile with our imagination and help us build something completely unique for our audience.”

The show launching today on the Flipkart App will give viewers an opportunity to win exciting prizes by reading between the lines, solving mysteries and decoding cryptic clues along with the episodes, and of course, being a part of the Kaun? Who Did It? experience.

Kriti Sanon channels her action avatar as she joins team ‘Ganapath’ in the UK!