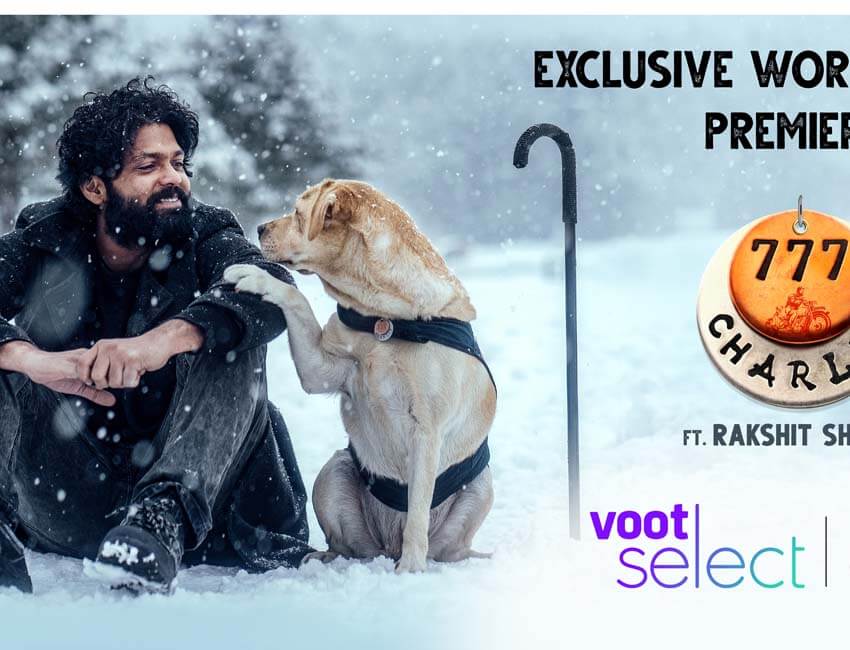 Viacom18’s leading video-on-demand streaming platform, Voot Select prides itself on encompassing a distinct content library that caters to a diverse audience base across India. In its endeavor to expand its Kannada content portfolio, the platform is all geared up for the exclusive direct-to-digital release of the must-watch, soul-stirring movie, 777 Charlie.

Written and directed by Kiranraj K. and produced by Paramvah Studios, 777 Charlie illustrates a beautiful and loving relationship between a pet called Charlie and the lead character Dharma, played by Rakshit Shetty, alongside a talented ensemble of the cast like Sangeetha Sringeri, Raj B. Shetty, and Danish Sait. The recently released superhit film captures how Charlie brings purpose to Dharma’s mundane life with humor, adventure, unconditional love, and a roller coaster of emotions. The plot revolves around Dharma who is stuck in a rut and spends each day in the comfort of his loneliness. Charlie waltzes into his life to turn it upside down (quite literally) and from there follows a life that is a riot of emotions, bonding, and a special relationship that tugs the heartstrings of viewers.

Kiranraj K, said, “777 Charlie has been a very emotionally fulfilling project. Since there are not many movies around this story plot, my endeavor was to make a movie that will resonate with pet lovers across the country. Shooting with Charlie has been challenging as well as highly rewarding, we had to keep up with her training schedules, and sweet quirks and understand filmmaking from a different lens altogether. I am overwhelmed with all the love we have received from all over the country for the film and excited for its OTT premiere now.”

Actor Rakshit Shetty said, “The film and my character Dharma is undeniably one of the biggest highlights of my career. Every emotion portrayed while shooting for 777 Charlie was natural and came straight from the heart. It will be an experience that I will cherish for years to come. I would urge the audience to watch it on Voot Select and keep spreading the love for our film.”

Sangeetha Sringeri said, “Working with the entire star cast of 777 Charlie, with such a unique storyline has been an incredible experience. I have been extremely humbled by the response received so far. Suffice to say, 777 Charlie has made the Kannada Film industry proud.”

777 Charlie is here to win hearts, yet again! Watch out for the exclusive digital premiere of the film only on Voot Select.

‘I like to be part of original stories and especially, original music’: Ranbir Kapoor