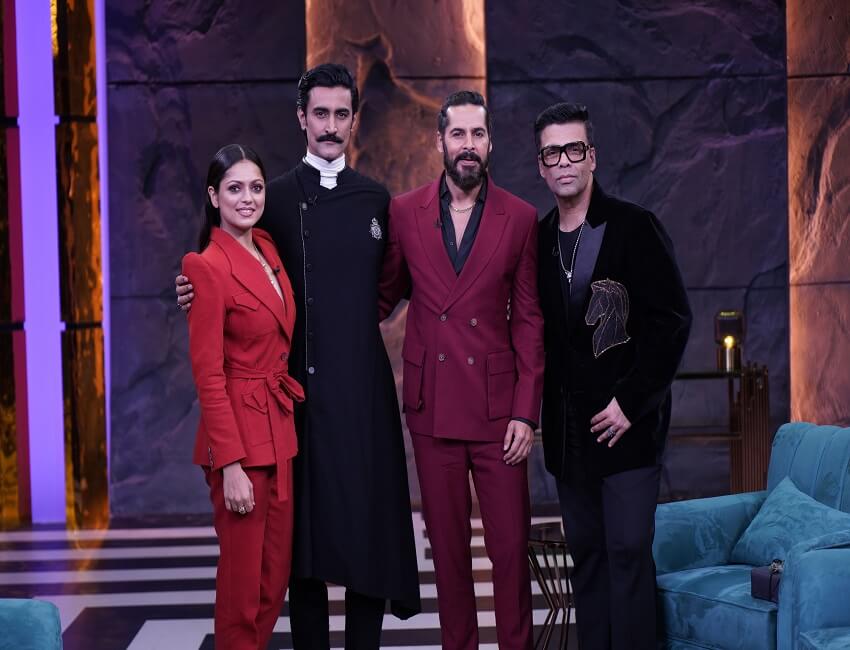 You know that a show has hit it big when it makes it to the famous ‘Koffee’ couch. That’s what happened with the newly launched magnum opus, ‘The Empire’ where Karan Johar came together with the cast for a special edition of his show – ‘Koffee Shots with Karan’.

Audiences who have anticipated the exciting return of the most talked-about celebrity show of tinsel town, are in for a special treat. The inimitable blockbuster Producer-Director Karan Johar, who makes the celebrities reveal their deepest and darkest secrets on the Koffee couch, shot for a very special episode with the dynamic cast of OTT’s biggest entertainer yet; Disney + Hotstar Specials ‘The Empire’.

The Empire’s powerhouse talent Kunal Kapoor, Dino Morea, and Drashti Dhami who have been receiving rave reviews post the show’s launch, joined Karan Johar for an enthralling conversation spilling a lot of secrets, sharing fun moments, talking on their unique journeys, and more.

Talking about this special episode, Karan Johar said, “The stunning visuals from the show The Empire have left the audiences, myself included, mesmerized and intrigued about what’s in store! So in my quintessential style, I sat down with the three ‘royal’ stars to find out the juicy bits about the behind the scenes action that unfolded. It’s been a fun segment! Of course, this chat is incomplete without my Koffee-shots.”

SEE: Karan Johar and Ranveer Singh in Delhi for recee of RRKPK!

A one of its kind visual spectacle, Hotstar Specials ‘The Empire’ recently launched to positive reviews and immense audience love, firmly establishing itself as THE big-ticket OTT entertainer to watch out for. Now, The Empire featuring on a special episode of Koffee Shots with Karan will showcase the fun and personal side of the stellar cast. The KWK fans are definitely going to be happy to see their favourite host back on the couch, with such an interesting guest list!

Disney+ Hotstar along with filmmaker Nikkhil Advani of Emmay Entertainment recently launched The Empire – a fiction saga of a warrior-turned-king. Directed by Mitakshara Kumar with story adaptation by Bhavani Iyer, the show is mounted on an unrivalled scale that brings together India’s finest talent, spectacular visuals, and a gripping narrative.