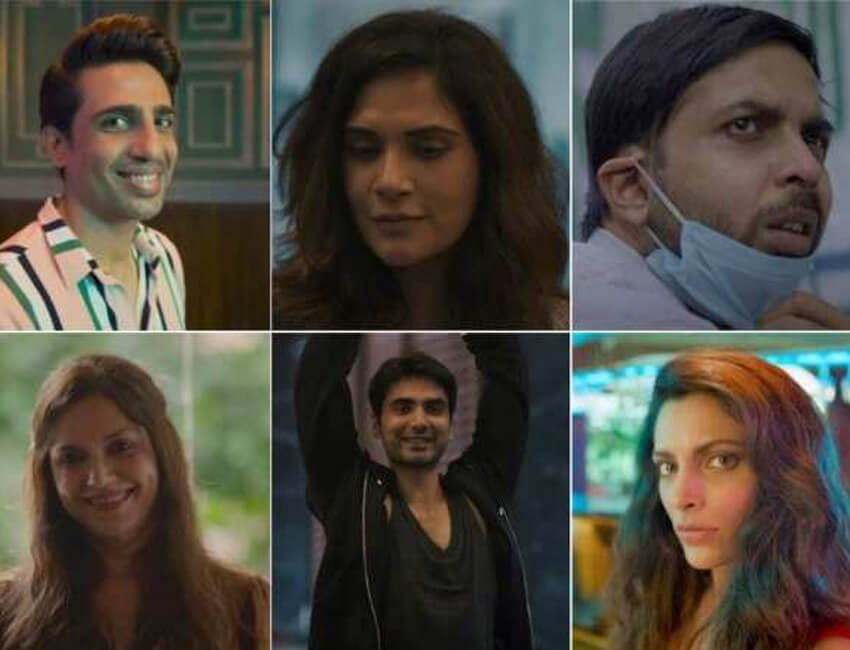 In these times when people fear human contact, a hypochondriac man meets a delightfully strange girl on a blind date, which turns out to be far more meaningful than he anticipated.

When the owner of a successful online news magazine learns of her husband’s sexual indiscretions, she is left shocked and unable to come to terms with it. Hopeless, she spirals into a dark maze of self-blame and attempts to end her own life. Enter, a ray of hope in the guise of a pesky intruder. Except his intrusions are actually interventions. Through their interactions, she finds the inner strength to face her unpleasant situation and then move on.

Two women. Four decades apart— one who chose to be alone and the other who is alone because of circumstances, confront loneliness and form an unlikely friendship during lockdown which brings them hope and a new beginning.

During the lockdown, a young migrant family after being thrown out of their rented house, for not being able to pay the rent, decides to illegally sneak into a lavish sample flat – that is in the same building in which they were working as construction workers. This time, for them, is a dream lived for a momentary period as well as a curse to cope up with their stark reality.

An affluent middle-aged single woman is forced to seek help of a young rickshaw driver to run some errands during Mumbai’s lockdown. The woman is stubborn & class conscious and resents the driver’s orthodox views on women. As these two strangers from opposite sides of the track spend three days together, they slowly start peeling away their defenses and form an unlikely friendship based on newfound respect and understanding, realizing they aren’t so different after all – both lonely in the big city of dreams.

The anthology follows the successful launch of Putham Pudhu Kaalai, the Tamil five-film anthology as well as the successful releases of several widely acclaimed Hindi films such as Chhalaang, Shankuntala Devi and Gulabo Sitabo, and Amazon Original series Bandish Bandits, Paatal Lok, Breathe: Into The Shadows, Mirzapur Season 2 among others. Prime members in India and across 200 countries and territories can stream the Amazon Original Anthology film, Unpaused Hindi starting December 18 only on Amazon Prime Video

“We are excited to extend our successful association with Amazon Prime Video and explore a new genre together,” said Raj and DK, adding, “Creating The Family Man was a liberating experience for us as content creators. And the assurance of thinking unconstrained encouraged us to extend our collaboration with Glitch. We loved making the short, as we tried a new style and genre! It was a bizarrely unique experience shooting it during the pandemic, and with all kinds of restrictions. We hope the audience will appreciate this new effort!”

“After the recent success of Paatal Lok I am delighted to extend my collaboration with Amazon Prime Video with a new genre,”, said director Avinash Arun, “It has been an introspective journey for all of us, as we seek to convey these messages through this film, in association with Amazon Prime Video. It has also challenged us to drum up innovative ways of telling a story, keeping in mind safety and health protocols, that are the need of the hour.”

Director, Nitya Mehra said, “It felt great to be back on set and back on shoot after months of being indoors. I was happy that Amazon said it wasn’t just about lockdown, but it was about them wanting us to tell stories that reflected positivity and that’s how Chand Mubarak came about, because I wanted to actually celebrate an unlikely friendship. I am always happy to join forces with Amazon Prime video, I feel they’re my creative collaborators, a home away from home.”

“In such unprecedented times, new beginnings are the only hope for many across the world. It’s inspiring to join creative forces with 4 incredibly talented directors and collaborate with Amazon Prime Video, the writers Devika Bhagat and Ishita Moitra, producer Rangita Nandy and the actors to bring alive one such story out of many many stories of these really special times. Shot under lockdown rules it was both exciting and challenging to bring alive the story. I hope the viewers relate and connect with it the way we connected and felt while making it.” Said Tannishtha Chatterjee.

“Being a part of Unpaused was a no brainer as far as we at Emmay were concerned. Not only was it an opportunity to be part of this wonderful ensemble of storytellers and allow us to take one more step in the collaborative relationship we had forged with Amazon Prime with the soon to be released Mumbai Diaries, but it also personally allowed me to explore complex emotions in a simple way, one that the traditional format would never have permitted me to do.”– Said Director Nikkhil Advani