Kaun Banega Crorepati promises to be Gyaandaar; Dhandaar and Shaandaar as it gears up for its 13th Season! 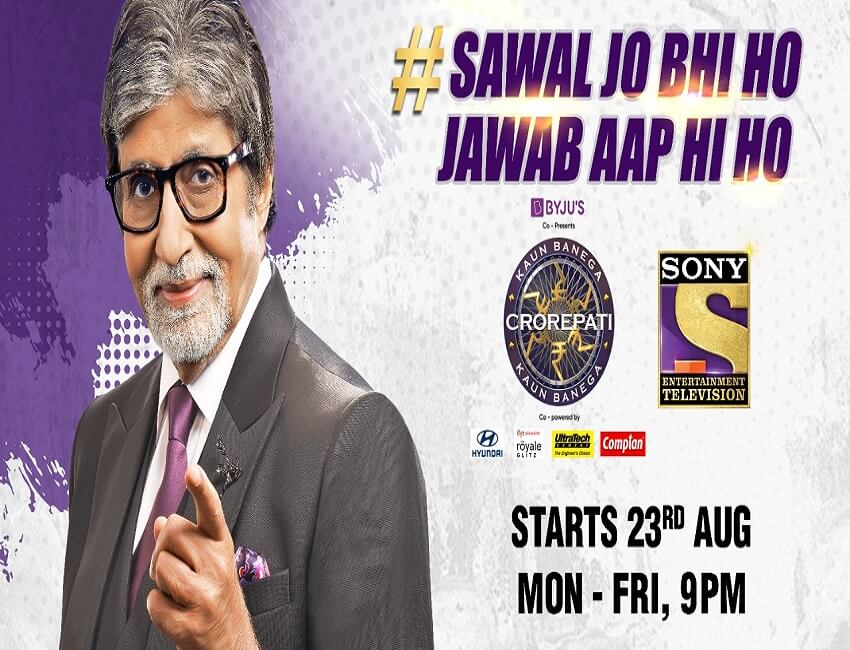 With the 13th Season on the anvil, Kaun Banega Crorepati, a show that commands unparalleled success and popularity, is all set to regale the audience starting 23rd August, every weekday at 9:00 pm on Sony Entertainment Television. With a thunderous response received during the digital auditions, the contestants are just one step away from the Hot Seat! Produced by StudioNEXT, and hosted by the superstar, Mr. Amitabh Bachchan, this season of Kaun Banega Crorepati makes way for an array of stellar surprises for its viewers.

So, deviyon aur sajjano, what’s different this season? For starters, the entire look and feel of the set, from the floor LED to the use of AR (Augmented Reality); a refreshed motorized virtual ceiling and gameplay graphics has been re-engineered. The game timer, that has everyone at the edge of their seats has been aptly re-christened as ‘Dhuk-Dhuki ji’ because let’s face it… she does make our heart’s race!

Fastest Finger First, with which the show commences, has been modified to Fastest Finger First – Triple Test. While it may seem challenging, it does hold a gamut of opportunities for the contestants. Instead of one question, the answer to which had to be chronologically aligned, contestants will now have to answer three GK questions. A leaderboard will showcase the time taken by each contestant to answer the respective questions and the one to answer all three questions correctly in the shortest amount of time will head straight to the Hot Seat!

When it comes to lifelines, yes, the Audience Poll is making a comeback this season! With the studio audience being reinstated, the entire vibe of the show has been raised a few notches higher. The other three lifelines include 50:50 (wherein 2 incorrect answers will get deleted from the four options); Ask The Expert (wherein the contestant can seek help from one distinguished professional) and Flip The Question (wherein the contestant will get an opportunity to change the question altogether and choose a topic for the replacement question).

When it comes to Fridays, Kaun Banega Crorepati will be seen celebrating Shaandaar Shukravaar with celebrity guests, from all walks of life, playing the game for a social cause.

With KBC Play Along on Sony LIV, viewers can enjoy the thrill of the gameshow by participating and matching their power of knowledge with the contestants on the hot seat simultaneously, starting 23rd August.

Kaun Banega Crorepati has always been the perfect fabric to weave in every Indian’s dream and aspiration. And with every season the show has celebrated human virtues of courage, self-belief, patience, confidence, and intelligence. This 13th Season of Kaun Banega Crorepati aptly states, sawaal jo bhi ho, #JawaabAapHiHo.
Tune in to Kaun Banega Crorepati, starting 23rd August, every Mon-Fri at 9:00 PM only on Sony Entertainment Television

Mr. Amitabh Bachchan
It’s the 21st year of my association with Kaun Banega Crorepati and I can never get enough of this show. It was probably for the first time, last season, that the studio audience wasn’t a part of the show and we saw a major change in the lifelines as well. I for one, truly missed them and their energy… it’s infectious! I am happy that the studio audience is back this season with a newfound vigour and so is the lifeline – Audience Poll. It’s an enriching experience for me, each year, to be surrounded by contestants from all walks of life and I look forward to an engaging & fulfilling gameplay. These contestants inspire me in every way.

Ashish Golwalkar, Head – Content, Sony Entertainment Television and Digital Business
For a show like KBC that has followed a certain creative pattern, it was time for us to break the mould and approach it differently. While digital auditions replaced the regular audition process, it didn’t deter the volume of entries. In fact, the ease of digital audition encouraged a lot more aspirants, based in the remotest areas possible to participate. We are happy with the spiritedness of each contestant, and we are hopeful that they fulfil their KBC journey. Furthermore, while we did introduce AR (Augmented reality) in the previous seasons, this year, the use of AR is far more superior and immersive. From refurbishing the entire set with the play of lights to the graphical elements and LED panels, India is the only country to host the format with the inclusion of such refined technological detailing. With distinct modifications to the game this season, we look forward to a rewarding gameplay and promise an enhanced viewing experience to the audience.

Mr. Siddhartha Basu, Consultant, KBC – Season 13
It’s the 21st year of India’s longest-running show, and it’s heartening to know that KBC remains such a strong family favourite, that still resonates with viewers across the social spectrum, and from all age groups. Each season, we’ve seen participants coming on to the hot seat from across the country, with varying levels of education and occupations, each with a distinct dream and story. Among a host of reasons that drives them, a key one is the search for ‘sammaan’ or respect. And they win that respect along with what can be life-changing amounts of winnings through a knowledge game. Gyan or knowledge is what provides a level playing field in our society, and viewers can now look forward to an exciting and entertaining new season of the show with a signature offering of gyan, dhan, and sammaan.