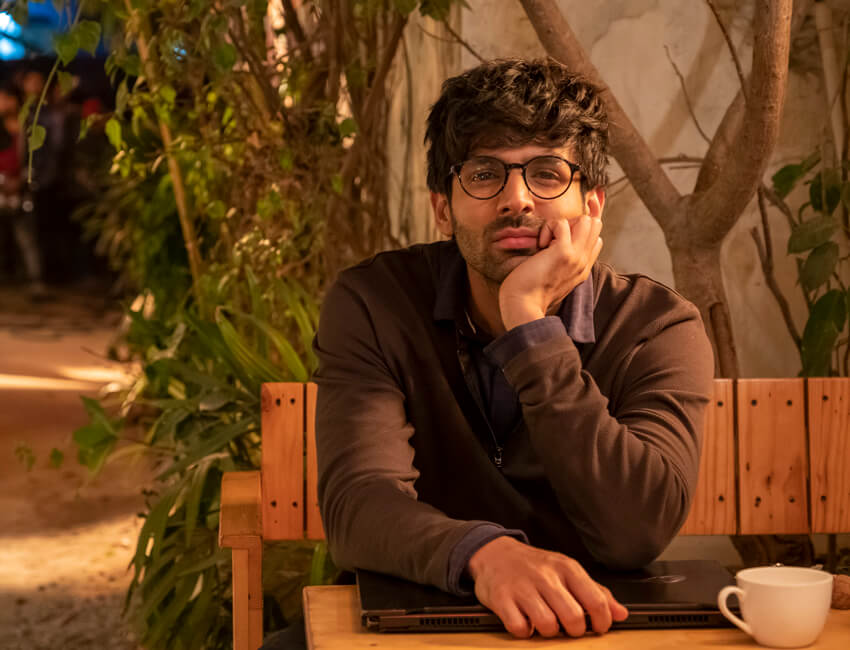 Love Aaj Kal, Imtiaz Ali’s much-anticipated romance starring Kartik Aaryan & Sara Ali Khan in the lead, presents a contemporary and relatable portrayal of two stories- one set in Udaipur in the early 90s and the other in modern-day Delhi, as they interact to learn (or perhaps unlearn!) from each other the different facets of love, commitment, and relationships.

Kartik Aaryan plays the lead actor in both the stories.

He is Raghuvendra or Raghu as everyone calls him, in the earlier story set in the 1990s in the picturesque town of Udaipur filled with inimitable old-world charm. There is small town innocence in this character that makes him extremely endearing. Like many of us who grew up in the late 1980s – early 90s he is fascinated by Qayamat Se Qayamat Tak and the idea of first love with his High School sweetheart Leena (played by debutant Arushi Sharma). In a performance that rakes up the nostalgia of that era, we see Kartik get into the skin of the character as his romance with Leena blossoms and together they explore the excitement of first love complete with movie outings and High School socials.

In the other story set in modern times, Kartik plays Veer, a software programmer in his mid-twenties living in Delhi. Amidst all the noise of social media and modern-day living, he exhibits a rare calm. He is an idealist who looks for a certain honesty and meaning in his relationships. A romantic at heart, Veer is a bit socially awkward and inarticulate in expressing his emotions, a trait that makes him extremely endearing in his relationship with Zoe (played by Sara).

According to Kartik, ” The two roles were very distinct, in the way they look, react and relate to people around them. Veer is a modern guy, somewhat geeky and socially awkward. He is sure of what he wants and that also sets him apart from the people around him. On the other hand, Raghu represents any teenage boy who has grown up in the 90s. Both Raghu and Veer are different when in love. Raghu is dramatic and animated as he goes through the excitement and thrill of first love with his high school crush Leena, in the picturesque town of Udaipur. Veer is sure of what he feels for Zoe but too inarticulate to express it to her. Therefore understanding Raghu and Veer required not only getting into their individual character’s skin but also an understanding of the time period where their stories are set.”

Talking about both these characters Imtiaz said, ” Veer is an idealist, a loner, a geek. He is a software programmer by profession. He is socially awkward, very clear in his mind though looking confused at all times. He reads quotations from the backs of trucks and coasters at bars and sets the principles of his life. Raghuvendra Shekhawat or Raghu lives in Udaipur in the 90s. He is extremely passionate and romantic. He is impulsive but very strong. While portraying Veer and Raghu, I did not compare one with the other. When Kartik played Veer, he was not thinking about Raghu and vice versa.

There are innocence, passion and impractical idealism in both characters but in different ways, so we concentrated on one character at a time. While training we worked a lot on the body language of both the characters so that he walks, talks and behaves differently while portraying them. Kartik played both the parts with great energy and even the unit felt like they were working with two different actors while shooting with Veer or Raghu!”