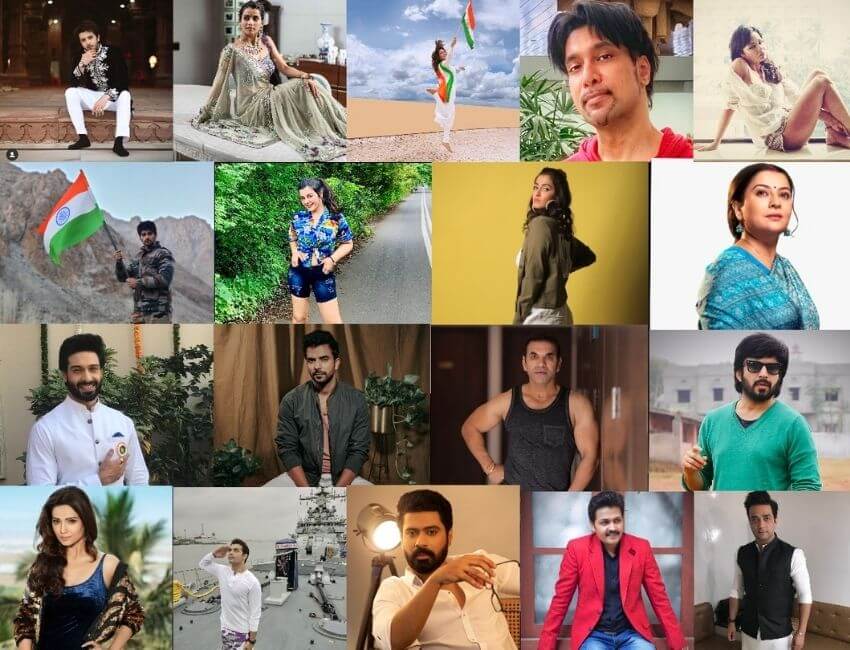 Sharad Malhotra : Celebrating Republic Day as a kid was a different feeling. We would have a flag hoisting at school, and then we were given sweets. But as I grew up and learned about the Indian constitution, I realised the importance of this day. Now when I am not shooting I watch the whole parade at home and then relish some jalebis. It, of course, fills you with a sense of pride and patriotism.

Kettan Singh : I have never missed watching the parade ever in my life, and it was my dream to watch it live because I always felt that if watching it on TV filled me with so much patriotism, then watching it live will be something else. And I want this dream of mine to come true.

Manit Joura : Patriotic films have always been my favourite and watching the parade on January 26th always inspired me to do something for my country, it’s such an emotional and proud moment, and I try to do my bit for my country, even if it means keeping my surroundings clean or helping those in need.

Adaa Khan : I have never missed the parade in my life. I have always enjoyed watching the marching from several regiments of the army, navy, and air force, along with their bands. Also, the various displays by various states where they show their culture. I continue to watch it.

Nitin Kumar Gupta : I always attend the flag hoisting physically wherever I may be. The high of seeing the Tiranga unfurl cannot fade away in my lifetime! This year working on my film ‘L.A.C’ post-production, and recording the song Sarzameen – e- Hindustan has made me feel even more patriotic if that was even possible!

Vijayendra Kumeria : Every year I make sure I watch the parade along with my family. It makes me feel proud. But at the same time, I feel one needs to be a citizen who abides by the constitution every day and not just feels patriotic on one or two days. Whatever you do, don’t let the sacrifices of the soldiers who fought or are still fighting to save our country go in vain.

Pranitaa Pandit : I have grown up in Delhi. I have attended the parade too. It was such an amazing experience. I enjoy watching the parade and I would love my child also to do so because it makes you feel more connected to your country. I don’t have anything to tribute to my motherland except my love. Whenever the national anthem is playing, I love to sing it too, especially in the theatre when the movie starts, I sing it loudly and I am very proud of it.

Rohit Choudhary : This is a very proud day for all of us. When I am in Delhi I always try to go and watch the parade, but when I am not in town I watch it on TV. I don’t miss watching the parade on that day. I love my country and I am proud of it and I pay tribute to the soldiers because of whom we are safe.

Nishant Singh Malkhani : As a kid, I loved watching the parade, though I couldn’t watch it every year because of the ceremonies held at school. Now, I make sure that I watch it without fail. Even if you feel patriotic the whole year, watching the parade makes you feel more patriotic, and you want to do anything in your power for your country.

Sucheeta Trivedi : I love watching the parade from Doordarshan days till today. I haven’t missed a single parade till today. This year amidst the pandemic it is going to be a very different feeling of how every human on this planet should learn that independence is equally divided between responsibility and freedom.

Ajay Singh Chaudhary : My father was in the army and my brother is also an army man. We have been watching all this very closely. It’s a festival for our family. If one has patriotism inside them, they will not celebrate it as just a holiday, instead, we should all celebrate it like a big festival. It’s a big day for us and we take it very seriously.

Srishti Jain : In school, we had a big celebration on Republic Day but sadly since we’ve grown up and started working it has become more of a holiday. None the less the building I live in celebrates Republic Day with enthusiasm. Also, my father and I love watching the parade

Aanushka Ramesh : Nowadays Republic Day is mostly celebrated only by kids at school. Though it is technically a holiday, I feel more patriotic and proud on that day, proud to be an Indian, and grateful for all the blessings this motherland has given me. I don’t watch the entire parade as such, but catch glimpses of it and other similar programs as well. However, I do share posts on my social media and pay tribute to my country.

Taher Ali Baig : I used to watch the parade in my childhood. As we all know Republic Day honours the date on which the Constitution of India came into effect replacing the British India Act (1935). We pushed the British out with a lot of pain and sacrifice; our independence would have no meaning without a proper constitution. The drafting committee lead by Dr. B.R. Ambedkar did an excellent job in drafting the constitution, it’s because of the constitution we are what we are. Anything I can or would do in respect to pay tribute to this day is less, I am way small and minuscule in front of it.

Malvi Malhotra : I feel that we should celebrate Republic Day and take a pledge that we would not let the efforts of our great freedom fighters go in vain because it is really important to remember the sacrifices which they have made. We should pay some kind of tribute to them. I like to go and watch the parade and salute our soldiers and our national flag.

Zaan Khan : When I am in my hometown during these days I watch the parade with my grandfather as he was a freedom fighter. But in Mumbai, if I am not shooting I make sure that I go to a place where flag hoisting is taking place, be it in a school or Gateway of India. It’s a very good feeling to see our national flag at the top. This year if I am shooting then I will make sure we all sing the national anthem and if possible we will do flag hoisting too.

Mohit Daga : While watching the parade during childhood I always wished I was there doing the parade and I believe this feeling is inside every person. For me, 26 January and 15 August are important because I have always wished to join the defence services but couldn’t. Even now I keep a track of what is happening in defence and still, before going to bed I hear the news. During school, we used to get chocolates and biscuits and we used to take it as a holiday, but as I grew up I got to know the importance of that day and today I feel happy when I see the parade.

Kavitta Verma : Coming from an army background my dad always made it a point since my childhood to watch the parade and ceremonies as a ritual. It surely reinstates our faith in the constitution of our beautiful country. As an army kid, I would say we should be grateful for those who got martyred for our land as it’s because of them we are breathing an emancipated life.

Sharad Malhotra: It’s upsetting that Republic Day is just a holiday for many people

‘Jayeshbhai Jordaar is designed as an entertainer!’ : debutant writer-director Divyang Thakkar opens up on how his much-awaited film will deliver a knock-out theatrical experience to audiences