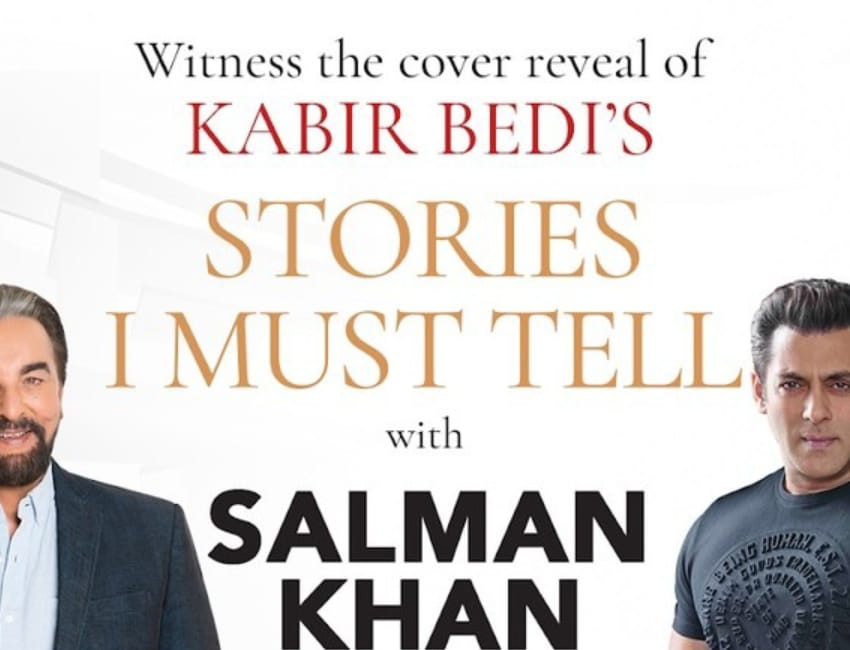 Delighting his fans, iconic actor Kabir Bedi  today unveiled the book cover of his upcoming autobiography—STORIES I MUST TELL: THE EMOTIONAL LIFE OF AN ACTOR—scheduled to be published with Westland Publications (an amazon company) on 19 April 2021.The book cover was revealed on a leading magazine’s Facebook platform, by Bollywood heartthrob Salman Khan.

Talking about his book cover, the international star, known for his baritone voice, regaled all present with the story of Terry O’Neil, Elton John’s photographer, who had taken his picture in the early ’70s, that’s made for an iconic book cover.

In his interaction with Salman, Kabir narrated a series of fascinating anecdotes that he has penned in the book. One of the most memorable is the story of his interviewing The Beatles which was a turning point in his career, making the shift from a career in All India Radio to advertising to theatre and finally foraying into the world of cinema. He also remembered his parents who were remarkable spiritual figures.

When referred to his book as being cinematic, the evergreen star, was hopeful that the book will be adapted for the screen or for a wonderful series. The actor talked of his journey in film, television and theatre, and the many ups and downs he has faced in life. Kabir Bedi regaled Salman Khan with stories of Hollywood and his epic series Sandokan.

Wishing good luck to Kabir Bedi for his upcoming book, Salman Khan said, ‘Your personality as a star and human being is pure, so whatever comes out from this book would be straight from your heart and soul. It is going to be a beautiful read and I wish that a lot of people will learn from your experiences shared.’

A delighted Kabir Bedi at the cover launch of his book said “It is indeed a special moment for me to have GQ and Salman Khan unveil the cover of my book. GQ represents the best style. And Salman is a person who has a heart of gold and one who has been a good friend to me. My book is the story of a middle class boy from Delhi who becomes an international star. It’s also about the successes I’ve seen, the emotional traumas I’ve suffered, how I survived the worst of them, and found fulfilment in the end.”

Stories I Must Tell: The Emotional Life of an Actor is about the highs and lows of Kabir Bedi’s professional and personal life, his tumultuous relationships, including marriage and divorce, why his beliefs have changed, his wrenching setbacks, and his exciting days in India,Europe, and Hollywood, and how he made India proud.

Stories I Must Tell: The Emotional Life of an Actor by Kabir Bedi will be published on 19 April 2021 across online and offline bookstores in India.

Kabir Bedi went from Bollywood, worked in Hollywood, and become a star in Europe. Internationally, he was the villain in the James Bond film Octopussy, and starred in The Bold and the Beautiful, one of the most watched series in the world. In Europe, his Sandokan series broke all television viewership records. He has millions of fans and well-wishers across the World. Kabir’s career spans three continents in three mediums: film, television and theatre. He has acted in over 65 Hindi movies. He starred with Michael Caine in Ashanti, and Roddy McDowell in Thief of Baghdad. He played the title role in the Italian film The Black Pirate (Il Corsaro Nero).On American television, he has acted in popular series like Highlander, Murder She Wrote,Magnum P.I.and Dynasty, and many HBO mini-series. On stage, he starred in John Murrell’s TAJ at the Luminato Festival in Canada, and M.M Kaye’s Far Pavilions in London’s West End. Kabir lives with his wife Parveen Dusanj, a producer, in Mumbai. He is writing his next book,continues to act, voices ad films and documentaries, and is known for his philanthropic and social causes.