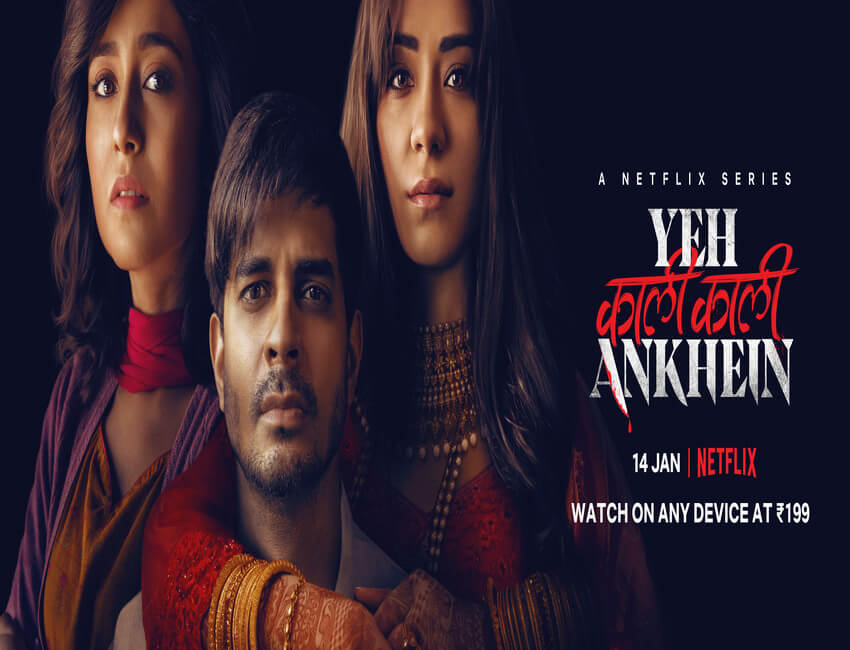 A man caught between a woman who loves him and one who desires him. Vikrant, a romantic simpleton in Yeh Kaali Kaali Ankhein, becomes an object of desire for Purva, who will go to any lengths to get him. As Purva‘s efforts to make him hers begin to destroy all that he holds dear, the mild-mannered Vikrant finds a new side of him emerging. In order to escape Purva’s clutches and reclaim his life with his true love, Shikha, he goes down a dark path only to regret it later.

Sidharth Sengupta, a director, writer and producer who is known for creating popular television shows including Balika Vadhu and the series Apharan, makes his Netflix debut with Yeh Kaali Kaali Ankhein. Below, he talks about his experiences directing the pulpy thriller.

“For she had eyes and chose me”

These simple lines perfectly represent Yeh Kaali Kaali Ankhein, a genre-bending series that navigates a twisted love story and gender dynamics, set against the backdrop of crime and desire in the heart.

The idea of Yeh Kaali Kaali Ankhein was brewing for almost twenty years. Since television is conservative in India, both Anahata (the writer) and I had kept this story close to us, waiting for the opportune moment to tell it… and then Netflix happened.  It took a few drafts to get the best script possible and breathe life into it. My inspiration for the series comes from the pulpy thrillers in classic Indian cinema spotlighting Vijay Anand and Salim-Javed, whom I grew up admiring. I have always been a fan of their work and Yeh Kaali Kaali Ankhein, the title inspired by the iconic ‘90s hit song from a film of the same genre,  is an ode to all the pulpy thrillers of those times.

The world of Yeh Kaali Kaali Ankhein showcases real characters, an interesting dialect, locations, cultural nuances and the overall visual treatment of the series. It’s been an absolute privilege to work with such amazing talent who have brought these layered characters to life; whether it’s the engaging story by Anahata Menon, the sharp and witty dialogue by Varun Badola, or the high-octane performances from Tahir Bhasin, Shweta Tripathi, Anchal Singh, Saurabh Shukhla, Brijendra Kala, Surya Sharma, Anant Joshi and the others. All the characters have shades of gray, a reflection of real life, and the actors have done a brilliant job bringing them to life. A special mention to the music by Shivam Sengupta and Anuj Danait, which brings in the desired flavor and soul to the series.

It has been a truly enriching experience making Yeh Kaali Kaali Aankhein and we’re excited to let audiences have a glimpse of what we’ve worked on and hope they will find it to be an entertaining watch. I am happy to bring this engaging story to life for Netflix and its vast audience spread across the globe. It is truly humbling to know that viewers not only in India but also across the world can view our work and celebrate our storytelling.