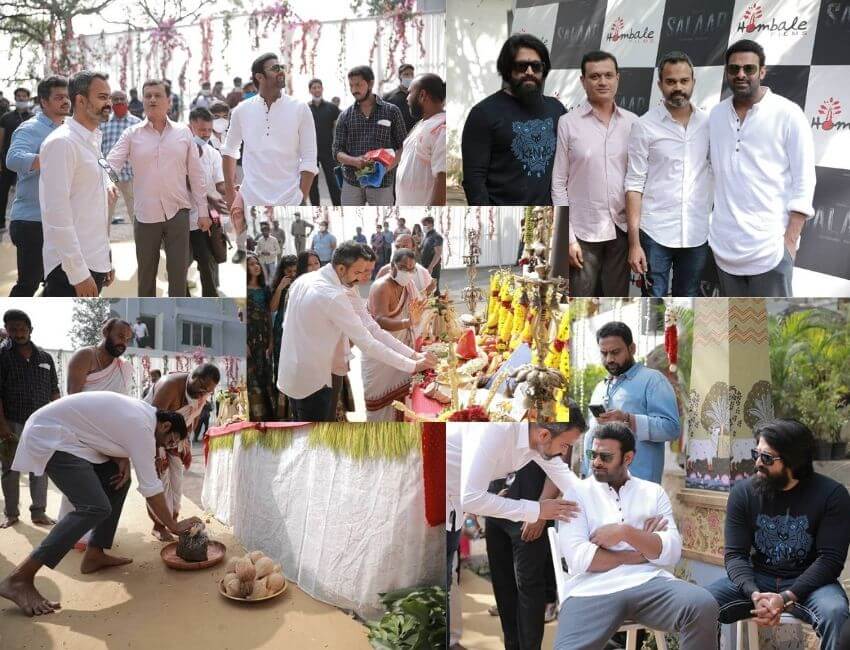 Hyderabad: A powerful report has come from Ramanayudu Studios in Hyderabad today. Stage has set for taking the Kannada Cinema to the next horizon and to demonstrate the power of Kannada talent in the entire Indian cinema.

Prabhas of ‘Baahubali‘ fame starred, produced by Vijay Kiragandur of ‘Hombale Films‘ which gave Indian Cinema blockbuster movies like ‘KGF‘, directed by much talented Prashanth Neel who has done his magic in KGF have teamed up to make ‘Salaar‘, for which shooting was launched in Rama Naidu Studios at Hyderabad today.

A big celebration for the movie fans, audiences and film fraternity, the team has done its Muhurth at 11AM this Friday in the presence of big names from the industry. Deputy CM of Karnataka, Dr C N Ashwath Narayan too graced the occasion. Film’s lead role, hero Prabhas and many other stars of Kannada and Telugu movie industry took part in the ceremony and conveyed their best wishes for the team. This Muhurth ceremony for ‘Salaar‘ movie has created much buzz in the social media as well as on a national level.

Karnataka DyCM Dr CN Ashwathnarayan who took part in the event wished the team all success. “Producer Vijay Kiragandur of Hombale Films which has given blockbuster movies like KGF series is producing the ‘Salaar’ movie. This has raised expectations about this new movie. With Salaar, Kannada Cinema will be crossing all the borders and reach all Indian audiences and with this, Baahubali star Prabhas will be further close to Kannada audience and will be welcomed by all“, he said.

Happy to do a movie with Prabhas: Vijay

“I became a fan of Prabhas’s performance in Baahubali, the moment I watched the movie. Now I have a chance to make films with him. I am very happy with this. We will be producing the film for Kannada, Telugu, Tamil, Malayalam and Hindi simultaneously. The film is being directed by Prashant Neel, who has directed our film ‘KGF’, ”said Vijay Kiragandur of Hombale Films.

Prabhas took part in the event

Except Prabhas as the lead role, the cast of ‘Salaar‘ movie has not been finalised yet. ‘Salaar‘ first look with Prabhas as the face of the movie, which came out when the film was announced, went viral all over the country. Prabhas is already starring in the film ‘Radhe Shyam‘, which is in last phase of the shoot. His starrer ‘Aadi Purush‘ is yet to begin the shoot. Along with this, ‘Salaar‘ movie has taken off today. Many of the KGF film crew, including actor Yash, Ravi Basrur, Bhuvan Gowda, were present. Especially Yash was the main attraction of the event.

A total of 19 films starring Prabhas have been released so far starting with ‘Eshwar‘ and till ‘Saaho‘ with back to back successful movies. Out of these, ‘Bahubali-The Beginning‘ and ‘Bahubali- the conclusion‘ have created history and resounding impact not only in India but also globally. Now this team which made their own blockbuster movies in their respective arena, have come together to make another history in the world of cinema, creating a lots of craze among movie lovers.