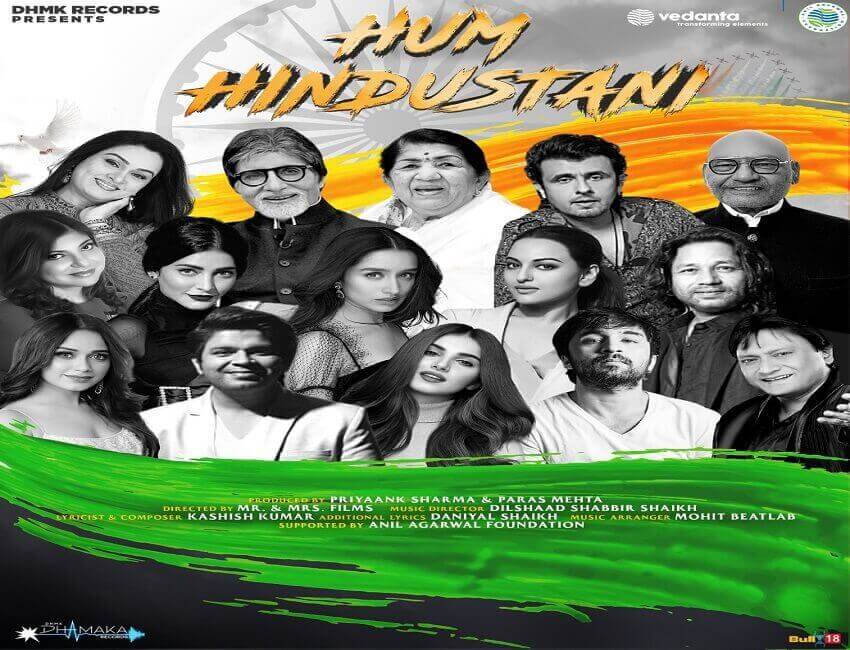 The song, titled Hum Hindustani by Dhamaka Records will witness 15 legendary personalities coming together for the first time ever to lend their voices to the melodious tune which is sure to instil a true feeling of hope, unity and patriotism within you.

This song is produced by Priyaank Sharma and Paras Metha for their music label ‘Dhamaka Records’ and features legendary personalities soulful voices crooning to the patriotic tune. That’s not all, to top that off next-gen stars like Shraddha Kapoor, Sonakshi Sinha, Shruti Hassan, Tara Sutaria, Ankit Tiwari, Siddhanth Kapoor & Jannat Zuber too will be singing in this one of a kind, legendary song!

With Hum Hindustani, Dhamaka Records sets a new precedent by taking it up a notch with the first-ever collaboration of the biggest names! A star-studded song with the much-needed message of having faith, keeping hope and uniting in our fight against the pandemic, the patriotic track will definitely set the bar high!

Priyaank Sharma says “The legendary actors and singers who have come together for the first time in this anthem will surely resonate with all and sundry in our emotions for the country and the world as a whole, uniting and spreading love and hope.”
Paras Mehta adds, “Team Dhamaka is honoured and can’t wait to share this track with the world”.

The song is supported by Anil Agarwal foundation of the Vedanta Group. They are committed to empowering communities, transforming lives, and facilitating nation-building through sustainable and inclusive growth and have been ranked among the 5 top philanthropists in the country.