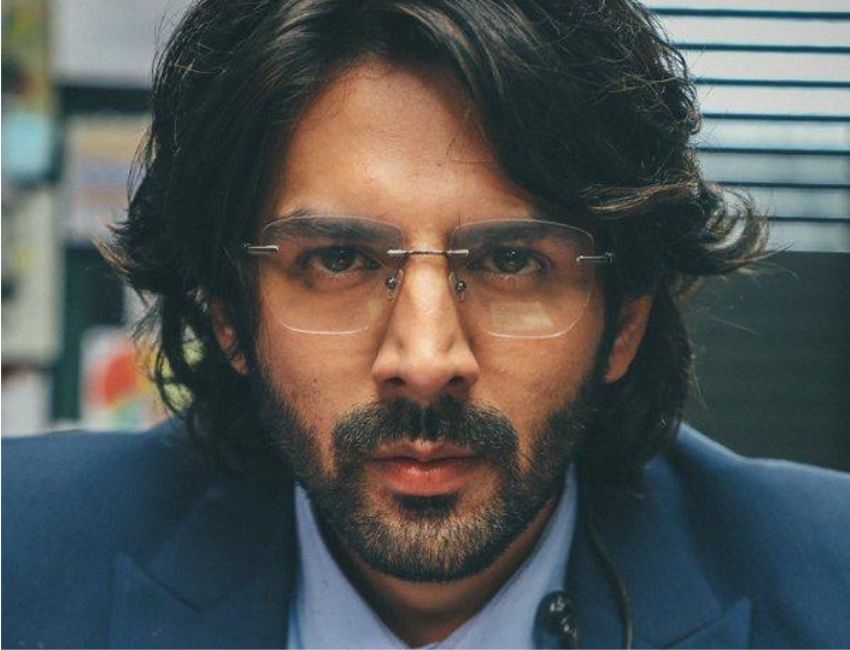 Kartik Aaryan has kickstarted shooting for his new film Dhamaka helmed by Ram Madhvani and the actor has surprised everyone with his new intense look. It’s completely different from what he has done in his previous projects and the first look of the film which he released few days back, introducing us to his character Arjun Pathak, left us amazed with his intense look.

Kartik Aaryan is leaving no stone unturned for his next as he shoots in Mumbai for the thriller-drama. Today, Kartik took to his social media profile to share a video from the set of Dhamaka and gave us a glimpse of his shoot-life amidst the pandemic. He gives us a tour of the set through his short video, where we see lavish preps on for the shoot on an open ground area, Kartik and other crew members with mask-on to ensure safety and the obvious loud sounds of the helicopter in the background. Looks like the actor is shooting for some high-octane scene for the movie and hence the helicopters are required on the set and this surely leaves us amazed. And while we are intrigued watching the whole lavish scenario from the set, Kartik’s witty choice of words to explain his mood leaves us in splits. The actor captions the video saying, ‘#ArjunPathak on set #Dhamaka. The helicopters are camera shy.’ Now that’s truly hilarious what the actor has said. While he tries to video-shoot the flying helicopter and give the netizens a glimpse of it, one cannot see the helicopter and the heartthrob rightly calls it a ‘camera-shy helicopter.’ Now trust this young superstar and his witty words to always bring a smile on our faces.

Read Also : Kartik Aaryan Releases The Teaser Of His Music-Video Which Sees The First Ever Digital Avatar Of Bollywood Hero

Today on Christmas Eve he ventures into the music-video world with some newness never seen before. The actor will launch his music video Nachunga Aise and this time it will feature his animated version. This is the first time a digital avatar of a Bollywood actor will feature in a music video and going by the teaser of it, we surely can’t wait. At the movies, he’s trying something new with Dhamaka, with the music-video too he does something unique and brings a twist. Kartik Aaryan loves to serve entertainment like no one else and this is the reason he’s rightly called the heartthrob of the nation