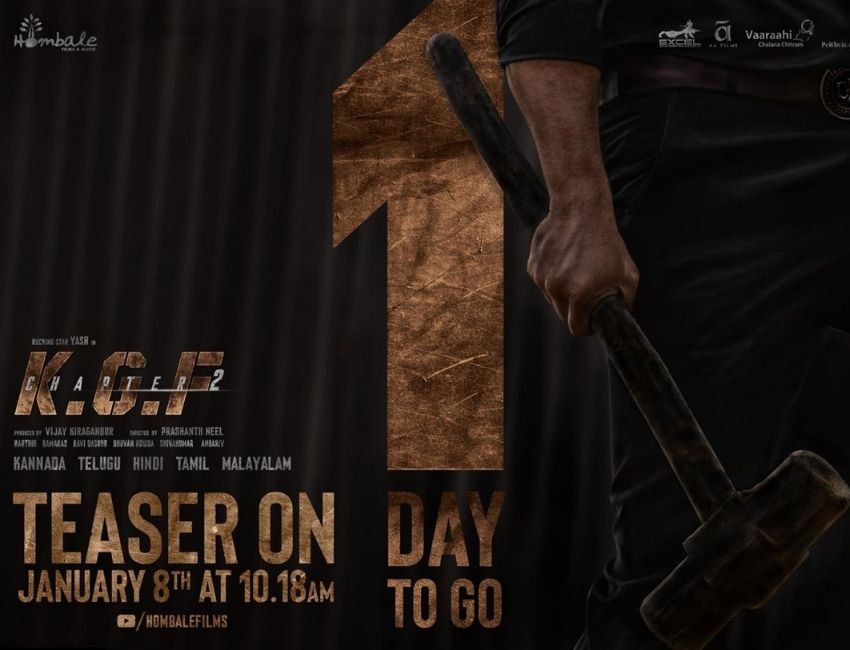 1 day to go for KGF 2 Teaser release, Yash says, ‘different shades to Rocky’ will be seen in Chapter 2′

Yash was a part of KGF Chapter 1 and both, the film and the actor garnered heaps of praises. The film set a stone in cinema that will be remembered for eons to come and Yash gave meaning to the word superstardom. KGF 1 released 2 years back in 2018, after observing a huge success at the box office, the film also did well on its television telecast.

Fans of KGF have been asking for the revelation of Part 2 and much to their surprise it was announced in 2020. Beginning the new year with a bang, the teaser for KGF 2 will be out tomorrow, January 8th at 10:18 AM. On the occasion of superstar Yash‘ birthday this is a gift to all his fans.

Yash shares, “KGF 1 was a magnum opus in a way and a complete labour of love and ambition. We had many limitations with Chapter 1 and ambition was the fuel that drove us. The team worked really hard and the success that Chapter 1 recieved was needless to say, a massive gratification in every way. We have worked just as hard, if not more, in putting together KGF 2 and made the film bigger in scale. The sucess of Chapter 1 has empowered us to do better and we hope to please and entertain our existing audience and also widen the audience and fan base for KGF Chapter 2. The agenda is to entertain our audience.”

On his role in Chapter 2 of KGF, Yash shares,”Chapter 1 was an introduction to Rocky, his personality, his world and his hunger to overcome his demons.
In KGF 2, you will see some different shades to Rocky that you haven’t seen before. It will be a bigger action packed and emotional ride!”

KGF 2 is a sequel of the mindblowing film that was KGF. Starring Yash and Sanjay Dutt in lead roles. Produced by Vijay Kiragandur and directed by Prashanth Neel brought by Ritesh Sidhwani and Farhan Akhtar’s Excel Entertainment, Hombale Films and AA Films. The first visual, ‘KGF Chapter 2 Teaser‘ will be out on Hombale Films handle on 8 January at 10:18 AM.