This Women’s Day, meet the trendsetting sheroes of Bollywood 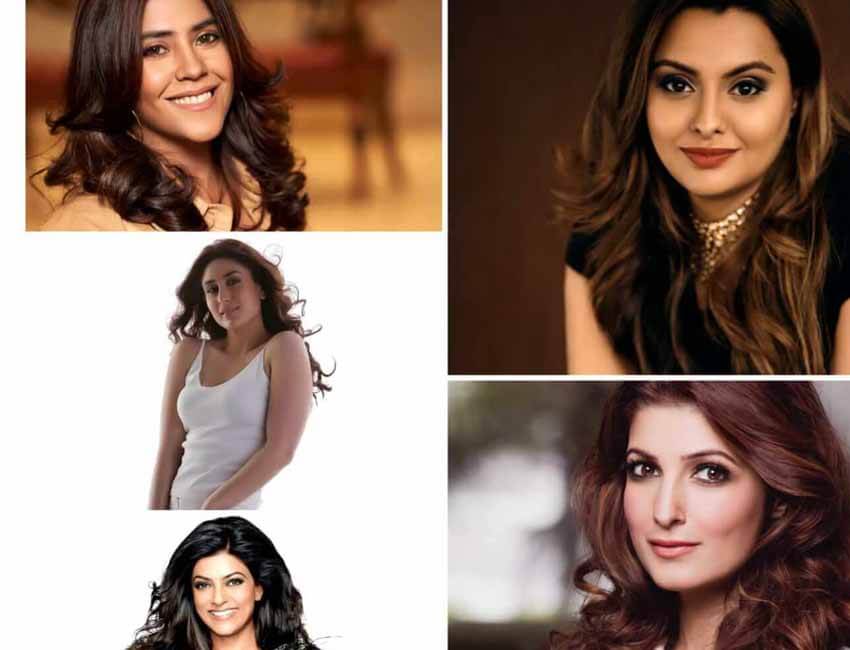 International Women’s Day is celebrated on March 8 to honour the social, economic, cultural, and political achievements of women. We mark this special time with a list of some of the most impressive achievers in Bollywood who with their personal and professional choices, have blazed new trails in the industry.

Not To Miss :- NORA FATEHI CELEBRATES AS HER SONG ‘ DILBAR ‘ CROSSES 1BOILLON VIEWS

Be it the big screen or the small, Ekta Kapoor has stamped her presence on both and has always evoked strong reactions from admirers and critics. Her content has been at times critiqued for being too regressive and occasionally for being too provocative. However, she has grown from strength to strength in an industry known for primarily masculine voices in board rooms. She founded Balalji Telefilms Limited in 1994 and since then, has gone on to become a formidable film and television producer and the joint managing director and creative head of her company. She also founded Balaji Motion Pictures in 2002 and ALT Balaji in April 2017.
A Padma Shri awardee, Ekta has grown beyond her lineage and is not just known today as actor Jeetendra’s daughter. She is now a starmaker and a path-breaker who unapologetically lives and works on her own terms.

Not one to be stymied by the labels of a star-daughter or star-wife, Twinkle Khanna has chartered her own course as an author, newspaper columnist, interior designer and film producer. She also gave up her acting career for more fulfilling creative choices. In 2015, her first non-fiction book,’Mrs Funnybones: She’s Just Like You and a Lot Like Me’ became a bestseller, and her second book, ‘The Legend of Lakshmi Prasad,‘ also inspired social entrepreneur Arunachalam Muruganantham’s biopic,’Pad Man.’ Her production house, Mrs. Funnybones Movies was set up in 2016.
Her first novel, ‘Pyjamas Are Forgiving’ made her the highest-selling female author in India in 2018. In 2019, Khanna also launched Tweak India, a bilingual digital media platform for women, proving that she is someone who always listens to her inner muse and believes in living a life that is rich in creativity.

Starting as a costume assistant on the sets of 2001’s ‘Mujhe Kuch Kehna Hai‘, Deepshikha Deshmukh earned her stripes at her family’s heritage production house to make her way up to lead the marketing, strategy making, and production efforts at Pooja Entertainment. She debuted as a producer in 2016 with the critically acclaimed film ‘Sarabjit,’ starring Aishwarya Rai Bachchan and Randeep Hooda. While constantly balancing her roles as a producer, a mother, and a homemaker, she has continued to expand her horizons and even started a natural skincare brand called, ‘Love Organically.’ Last year, she took on a global pandemic to complete the start-to-finish shoot for Pooja Entertainment’s big-budget production, ‘Bellbottom,’ in two extended outdoor schedules. In 2021, she will be helming the production of ‘Ganapath‘, an action thriller starring Tiger Shroff, and will continue to charter new creative territories.

Sushmita Sen has lived a charmed life but she has never taken it for granted. Defying all predictions, she pipped Aishwarya Rai to the post by winning the Femina Miss India title in 1994 and went on to become the first Indian to win the Miss Universe title at the age of 18. Apart from being a successful actor, she has walked her talk as a social changemaker by adopting two baby girls in 2000 and 2010. She was diagnosed with the Addison’s disease, a condition which affects the body’s adrenal gland, in September 2014 but fought her way back to health and also made a comeback as an actor in 2020 with the hit OTT series, ‘Aarya.’ Be it her personal or professional life, Sushmita has always won her battles with unmatched grace and dignity.

Kareena Kapoor Khan has proven that it takes more than a family name to survive and thrive for over two decades in the film industry. Even her six Filmfare Awards do not begin to sum up her longevity or the fact that she remains a much in demand leading lady with immense box-office clout.

After making her acting debut in the 2000 with ‘Refugee,’ her performances in films like ‘Aśoka‘, ‘Kabhi Khushi Kabhie Gham‘, ‘Chameli,‘ ‘Dev’, ‘Omkara,’ ‘Jab We Met‘, ‘Kurbaan,’ ‘Heroine,’ ‘Udta Punjab‘, ‘3 Idiots‘ and ‘Veere Di Wedding‘ have established her versatility and star power.
Her off-screen life has fascinated fans and popular culture but she has always made her personal decisions with fearless conviction. In a beauty-obsessed industry, she has worked through two pregnancies unselfconsciously and will now be penning a book to tell women how she did it. She has also worked with UNICEF since 2014 as an advocate for the education of girls.