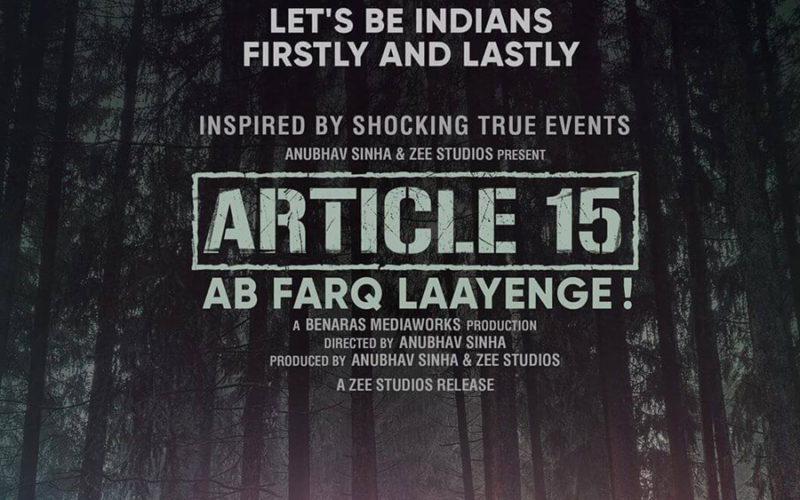 Ayushmann Khurrana starrer and Anubhav Sinha directorial opened the tenth edition of LIFF, which is Europe’s largest South Asian film festival. Not only this, but the film Article 15 has won at the London Indian Film Festival which is truly a proud moment for the whole nation.

The film which has a hard-hitting storyline is already touching the right chord with all the audience. Inspired by true incidents, the film brings out the thought-provoking reality of the society to the screens with its thrilling investigative drama backdrop.

Escatic about the overwhelming response at the LIFF director Anubhav Sinha said, “I am so happy that the film actually connected with Indians abroad and with non-Indians alike, who are not facing this version of inequality on a daily basis”.

The investigative drama, Article 15 has struck the right chord with Bollywood as well as the film’s special screening. All the personalities who watched the film were touched by its gritty and hard-hitting content which emphasizes on the atrocities in the society and has come forward appreciating Anubhav Sinha‘s path-breaking content and Ayushmann Khurrana’s promising acting. The audience is regarding the film as the most important film of the year for its relevant content which is inspired by real incidents.

The film features Ayushmann in a never-seen-before cop avatar with a heroic element to the character. With a no-nonsense appearance, the character has already become a hit among the audience with a realistic portrayal.

The film released on 28th June and has already gripped the nation with its catchphrase, ‘Ab farq laayenge’.